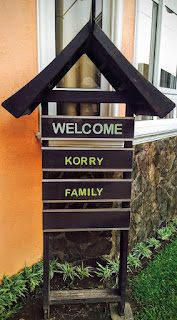 (Click the picture for photos)
4/11
Hope I don't get too deep on this one...
(The last day at Samaritans Place)
It was morning after another good night of sleep. Seems like waking up around 6AM is becoming normal here. After a good round of bacon and pancakes, we signed some legal documents for the adoption and headed into town to see the lawyer. It must have been around 9AM in the morning and this town was hoping man.  I have never seen people drive in all the lanes at the same time but somehow the make it work with less accidents than we have. Kuya Joe drove Ate Ahyee and us to the lawyer to get out paperwork notarized. It was a small crowded office with signs and paperwork everywhere. Looked like something out of the movies. We signed the documents, got the notarized stamp, and met with the attorney briefly. Boom, done with that bit. We headed off to the SM Mall in Dasmarinas again to find Joshua a few more clothes and also a couple cool shirts for dad & mom.
The malls are crowded and similar to ours, except very Asian in vibe. A lot of electronics, a huge emphasis on fashion, probably more food stops than actual stores is what popped out at us foreigners. Got the shopping done and grabbed a quick slice of pizza and halo halo before returning to SP. We took a little downtime and met with Ate Dulce, Ate Ahyee, Papa Joe, Mama Gena, and Solveig (a volunteer from the states). During this session we talked about concerns, personal behaviors of Joshua, and things he might need help with or that we should know. Shortly after a birthday party was held in the play yard of SP with pancit, pancit, pancit! We also dug into the cake that we bought for the kids and staff. There was a lot of laughing and silliness, but then there seems to be that element always. This is quite possibly the happiest place I've ever experienced. I'll talk about that more later.
There was more volleyball, jumping on the trampoline, and me playing "pig" at the basketball hoop with Joshua's neighborhood friend Alisa. Some time passed in between and we freshened up for dinner with Ate Dulce and Ate Ahyee. My stomach was still full from the "snack" we had before. I fear that I may have gained a few pounds in this trip. The food is so good and we have been eating a lot of it. Ate Daisy, who cooks the food here, is an excellent cook by the way. We sat down for tilapia (fried crispy with the head intact), lumpia, and rice. Again, everything was so good. I feel like I'm still stuffed at 4:11AM as I write this.
After dinner the staff put together a presentation show for us at Joshua's going away party. All the kids piled over and the fun began. I had kids in every arm, on my lap, asking me questions, checking out my rings and tattoo as did Liza. This was much like other times we had been around the kids except even more interaction. I can't tell you how cute these guys are, I can only show pictures which don't capture their different little personalities so keep that in mind. We watched a presentation with pictures of Joshua through the years, some singing and dancing from the kids, thoughts from staff and the house parents of Joshua (Papa Joe and Mama Gena). It was a very happy and silly time with a lot of laughter and fellowship. It was also a time filled with many tears. Staff and kids were wishing Joshua well on the next part of his life. Liza and I were asked to sing as well. I played Joshua's favorite song "God Gave Me You" and my song "The World" to the best, loudest, and sweetest crowd I've every played to. The night ended with a lot of hugs and a big prayer with a circle formed around Liza,  Joshua, and I by the staff and all the kids. It was a very powerful and emotional prayer by Ate Dulce. I love the prayers in Tagalog especially when Francis, the oldest boy prayed. They are very sincere and thankful to our Father. It's a wonderful language to listen to and amazing to be a part of their prayers. If God is to hear any prayers, it would be these. I don't know how anyone could hurt these kids or disregard and abandon them seriously. This is certainly one of the greatest examples of sin in the world. Being here in this place filled with love, strength, laughs, support, and the feeling of family shows the greatest example of God's power and love in this world. I feel that this is a preview into the next world when children of every color come together as a family again.
Go here for the MUSIC:
www.timkorry.com