Time Travel : The End of the Philippine Adventure 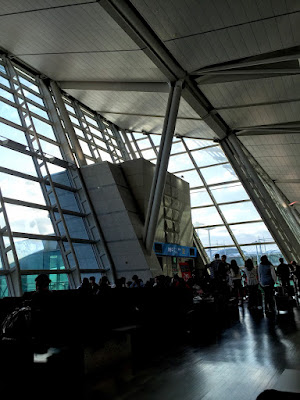 (Click the photo for pictures)
4/17
It's 3:18 in the morning partly on the way to Korea. There is turbulence and I'm watching Macbeth. I do not care for turbulence and do get quite nervous. I'm sure I'm not the only one. I do however like Shakespeare... very much. I do currently wish I had some whisky. We put our lives in God's hands and hope that he will protect us in safe travel. We have been very blessed on this trip with safety and the good people that God has put in our path. We are thankful.
The airport in Seoul was pretty empty on the walk through immigration and to the gate. That was great. The 4 hour wait was rough. Still no sleep for me. Liza and Joshua were able to grab a few winks but I kept awake with a few cups of coffee. The airport was cold and irritating this time. Announcements were going off all the time, r's were used in place of L's (sorry, but after no sleep for over a day it's not amusing), and airport staff was definitely not as helpful and friendly as in the Philippines. Aside from that stuff, we were looking good.  That's just a long time to wait and it's cold in here. After a mini cowboy meal of beef jerky and coffee I was ready to go. We finally were allowed to board and I was ready to throw party. Sleep deprivation and oxygen in the cabin are a great combination, plus we got slippers on this flight. Sweet...
3:11 PM? AM? I don't know but we have been having the worst turbulence I've ever experienced. Poor Joshua has been sick and probably scared. I can't say that the rest of us feel much better. Still 8 hours to go. This is the day that will never end. I was able to get s brief amount of sleep but I'm afraid that's it. This has been a rough one. I'm looking very much forward to landing at O'Hare Lord willing. I know you've probably never heard anybody say that. Just meditate on that one for a sec. One of the flight attendants on Korea Air gave us a pill for Joshua's upset stomach. These attendants are awesome, pro all around and we can't say enough. Now at the same time we get the overhead announcement for turbulence at least every half an hour. I think a more appropriate announcement would be,"Hey, it's going to be smooth for a few minutes".  I would rather hear that one.

We did arrive safe and sound in Chicago but I've got to tell ya, the turbulence was remarkable. Yes, those bags in front of the seat do work... We were so thankful to get on the ground. After being treated like some kind of threat by our immigration, we finally were allowed to leave the airport an hour and a half after we landed. Seriously, the things we had to go through at the airport were ridiculous. Yes we arrived with an innocent 15 year old boy. Really guys? I could write several posts about this episode. We were picked up by a limo (don't get used to it kid) and driven back to Wind Point where we deliriously overtired people had..... McDonalds (that's really the only reason, plus the kid was asking for it). From Macbeth to McDonalds.Yep, now the real adventure begins.... back home, back to the gazebo, back to the lake....