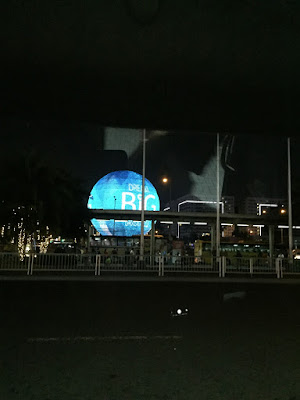 4/13
Today is all about the Inter-Country Adoption Board. We woke up early again and headed down for the breakfast buffet. I still felt a bit full after the crispy pata last night.  Joshua didn't really dig the buffet and we never eat enough to be worth the money. Hoping for the best as far as lukewarm buffet food in Southeast Asia... or anywhere really anyway. Who really likes buffets? Well, we've been okay so far and the food is very good at Hotel Jen.  Excellent staff as well.
Mang Ramon picked us up from the hotel and we were on our way through the early morning streets of Manila. We arrived at ICAB about an hour early and finished shortly after for signing and receiving the final paperwork in the Philippines. ICAB was professional and friendly, not nearly as stressful as I anticipated. Whew... (wiping brow) Diggin the Filipinos.
In between time, Mang Ramon drove us through Intramuros and past some notable sights in Manila including Rizal Park, The Manila Hotel (General MacArthur fame), The Coconut Palace, San Agustin Church (original doors from 1607) and other sights. We really enjoyed seeing the historical buildings, what you don't see in the pictures is the extreme poverty. There were people sleeping by the roadside, mothers feeding babies, dogs eating garbage, people eating and sleeping in garbage, and this was in about 100 degree weather. There are the super rich but mostly the impoverished in Manila. We are very blessed in America. Maybe I should have taken pictures of these things. They are hard to look it and absorb. Mang Ramon took us back to the hotel and introduced our driver for tomorrow, Mang Art. He would be the one to take us to Ocean Park, which everyone is excited to see.
So, off we were to The Mall of Asia to grab some more clothes for Joshua and to check out one of the biggest malls in this part of the world. Trying on clothes is so much fun in gigantic malls... I'm not sure if I really need to even write anything here. We did get a shuttle over from Hotel Jen and planned our time for pickup. Security at this mall is no joke. Guns and everything, but I suppose that's a good idea in today's world. We were okay with it. We had some crappy mall food (Pizza Hut... we were hungry) and snapped a few pictures outside before our pickup time. Back to relax at the hotel...
For MUSIC
Go to www.timkorry.com